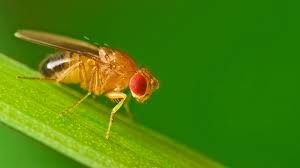 The experience of a fruit fly dying from cancer may seem worlds away from that of a human with a life-threatening tumor. Yet, University of California, Berkeley, researchers are finding commonalities between the two that could lead to ways to prolong the lives of cancer patients.

Fruit fly research points to a new anti-cancer strategy distinct from the conventional goal of destroying the tumor or cancerous cells. Instead, the research suggests, launching an attack against the destructive chemicals the cancer is throwing off could increase survival rates and improve patients' health.

"It's a really complementary way of thinking about therapy," said David Bilder, UC Berkeley professor of molecular and cell biology. "You're trying to help the host deal with the effects of the tumor, rather than killing the tumor itself."

Jung Kim, a postdoctoral fellow in Bilder's lab, recently discovered that tumors in fruit flies release a chemical that compromises the barrier between the bloodstream and the brain, letting the two environments mix -- a recipe for disaster in numerous diseases, including infection, trauma and even obesity. In collaboration with the labs of UC Berkeley professors David Raulet and Kaoru Saijo, Kim and Bilder subsequently demonstrated that tumors in mice release the same chemical, a cytokine called interleukin-6 (IL-6), also make the blood-brain barrier leaky.

More importantly, they were able to extend the lifespan of both fruit flies and mice with malignant tumors by blocking the effect of the cytokine on the barrier.

"The IL-6 cytokine is known to cause inflammation. What's new here is that this tumor-induced inflammation is actually causing the blood-brain barrier to open. If we interfere with that opening process but leave the tumor alone, then the host can live significantly longer and healthier with the same tumor burden," Bilder said.

IL-6 plays other vital roles in the body, so scientists would have to find a drug that blocks its action at the blood-brain barrier without altering its effects elsewhere to benefit cancer patients. But such a drug could potentially extend the life span and health span of human cancer patients, he said.

Six years ago, Bilder's team found that tumors in fruit fly also release a substance that blocks the effects of insulin, providing a potential explanation for the tissue wasting called cachexia that kills one-fifth of all cancer patients. That work is now being explored by numerous labs around the world.

One advantage of helping the host fend off a tumor's effects on tissues far from the tumor site is that it could potentially reduce or eliminate the need for toxic drugs typically used to subdue tumors. Unfortunately, such medicines also harm the patient, killing healthy cells as well as cancerous cells.

Beyond these side effects, targeting tumor cells "also selects for resistance in the tumor, because the tumor has genetic variability -- a drug-resistant clone arises that will then cause cancer recurrence," he said. "But if you could target the host cells, they have a stable genome and are not going to gain resistance to these drugs. That's our goal: to understand the ways that the tumor is affecting the host and attack the host side of the tumor-host dialogue."

Bilder and his colleagues published their work on IL-6 disruption of the blood-brain barrier last week in the journal Developmental Cell. In addition, he authored a review of the impact that fruit fly research has had on understanding tumor-host interactions that was published last month in the journal Nature Reviews Cancer. Their cachexia work appeared in 2015 in Developmental Cell.

According to Bilder, scientists still are uncertain what causes death in many cancer patients. Cancer of the liver, for example, clearly destroys the function of an organ essential for life. However, other organs, like the skin or the ovaries, are less critical, yet people die from cancer in these sites, too, sometimes very quickly. And though cancers often metastasize to other organs -- multiple organ failure is one of the leading causes of cancer death listed by doctors -- Bilder questions if that's the whole story.

"Many human cancers are metastatic, but that doesn't change the basic question: Why does the cancer kill?" he said. "If your tumor metastasized to the lung, are you dying because of lung failure or are you dying from something else?"

For that reason, he works with non-metastatic tumors implanted in fruit flies and mice and looks for systemic effects, not merely the impact on the tumor-containing organ itself.

One systemic effect of cancer is cachexia, the inability to maintain weight, which leads to wasting of muscle even when the patient is receiving intravenous nutrition. While Bilder discovered one possible reason for this -- cancers release a chemical that prevents insulin from storing energy in the body -- other scientists have found additional substances released by cancers that may also be responsible for tissue wasting.

Like cachexia, breaches in the blood-brain barrier may be another long-distance effect of tumors. In the new study, the researchers found that blocking the activity of IL-6 at the blood-brain border increased the lifespan of flies with cancer by 45%. But, of course, laboratory mice must be euthanized before they suffer and die from experimental cancer. Still, the team found that after 21 days, 75% of cancer-carrying mice treated with an IL-6 receptor blocker were alive, versus only 25% of untreated mice with cancer.

"It's not just the breakdown of the blood-brain barrier that's killing the animals," Bilder said. "Flies can live for three or four weeks with a leaky blood-brain barrier, whereas, if they have a tumor, they die almost immediately when the barrier is compromised. So, we think that the tumor is causing something else to happen. Maybe it's putting something in circulation that then gets through the broken barrier, though it could also be something going the other way, from the brain into the blood."

Bilder has found additional cancer-produced chemicals in flies that he's linked to edema -- bloating from excess fluid retention -- and excess blood clotting, which leads to blocked veins. Both conditions frequently accompany cancer. Other researchers have found tumor-produced fly chemicals linked to anorexia -- the loss of appetite -- and immune dysfunction, which are symptoms of many cancers.

Bilder said that studying cancer in fruit flies offers several advantages over cancer models in other animals, such as mice and rats. For one thing, researchers can follow flies right up to the moment of death to determine what actually causes mortality. Ethical concerns prevent researchers from allowing vertebrates to suffer, so research animals are euthanized before they die naturally, containing a complete understanding of the ultimate cause of death. For these animals, tumor size is used as a proxy to assess an animal's chance of survival.

"We're incredibly excited about the potential to look directly at survival and life span," he said. "We think that this is a real blind spot that hasn't allowed scientists to address questions about how the tumor is actually killing outside of its local growth. That's not to say that tumor size is misleading, but fruit flies give us a complementary way of looking at what cancer is doing."

And while most cancer studies in rodents involve just a few dozen animals, fruit fly experiments can involve many hundreds of individuals, which improves the statistical significance of the results. Fruit flies also reproduce quickly and have short natural life spans, allowing quicker studies.

Bilder acknowledges that fruit flies and humans are only distantly related. Still, these flies -- Drosophila melanogaster -- have played a key role in understanding tumor growth factors and oncogenes in the past. Fruit flies now could also be essential in understanding cancer's systemic effects.

"Not only can flies get tumors that resemble human tumors, which we described 20 years ago, but we're now seeing that the host response has remarkable similarities in cachexia, coagulopathies, immune response, cytokine production, all of these things," he said. "I think it (the tumor-host response in fruit flies) is a superrich area. Our hope is to bring attention to the field and attract other people to work in it, both from the fly perspective and from the cancer biology and clinician perspective."